Since 2006  France has commemorated nationally the afflictions of slavery and its abolition. Every May 10 is meant to be an occassion to reflect on a long episode in history now lawfully recognised in french legislative texts as a crime against humanity .

Fanny Eaton was the daughter of a slave and (it is conjectured) her white owner. Born in Jamaica in 1835 Fanny arrived in Victorian London in the 1840s with her mother who had since acquired her freedom.  Charwoman, launderer and seamstress, Fanny modeled regularly at the Royal Academy to earn extra money (and possibly to get away from her growing family –she had 10 children).

Telling her story merits the detour through slavery and it’s abolition because Fanny Eaton is one of the handful of women who modeled for the pre raphaelites (Frederick Sandys, Rebecca Diliman, John Millais) –known for their peculiar dalliance with the painterly landscape tradition. 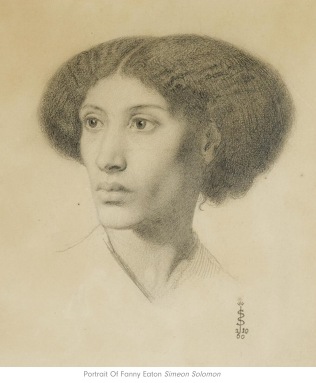 Today while the pre raphaelites are known and the face of Jane Morris (wife of the arts and crafts/pre-bauhaus UK instigator William Morris) is most familiar (see pictures below), Fanny Eaton’s story is only just surfacing. It is possible that the story is all the more alluring because Fanny is said to have resembled Jane. It comes as no wonder that Dante Gabriel Rossetti wrote praises to Eaton’s beauty and she has been refered to as the other model.

One of the important remnants of the brotherhood of pre raphaelites was their close observation of the workings of Nature, which is why admiring their work bears the effort. Of Romantic fibre, the préraphaélites are remembered for their medieval tendencies and their practice of the landscape. It feels as the painters extend an invitation to step into the painting. It is no longer simply a Nature view à la Erich Ulrich, provoking a relaxation response, or a restorative response reminiscient of the Kaplan hypothesis, but a Nature experience, due to the vividness of the scenes.

As John Ruskin, important contemporary art critic  of the movement wrote “Every pre Raphaelite landscape background is painted to the last touch, in the open air, from the thing itself”. The pre-raphaelites preceeded the impressionists in their outdoor workings by at least a decade.

We will have several other occassions to look at landscape artists of various schools in other posts. It is a rich and varied field. And the theories of artialisation and our cultural affective links to the land may be in part an effect of the aesthetic programme of landscape painters. I talk a little about artialisation here. 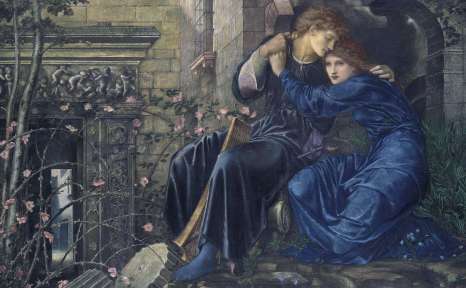 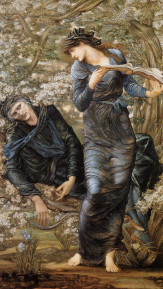 Attention to detail and to colour were essential, so much so that the préraphaélites attempted to revive the brilliance of colour of the Quattroento art. They developed  a glazing technique that avoided the use of bitumen (a popular asphalt thought to lend shadow to colour but which eventually degenerated into dark greens and blacks, damaging the canvas itself). If you are entirely unfamilier with this victorian era movement, you can learn more about the pre-Raphalelites here or here in this series of BBC documentaries.

Placing their femmes fatales in the landscape, mysterious, alluring, evasive, ethnically ambiguous too, since biblical scenes were another favourite, it is no wonder that Fanny Eaton was well appreciated for her unusual features. The pre Raphaelites sketched her and painted her on several occassions and likenesses of this direct descendent of a slave can be seen in the Tate museum. It is a personal pleasure to see her resurfacing. I can’t help asking, how many others are there….forgotten, blanched, overlooked. 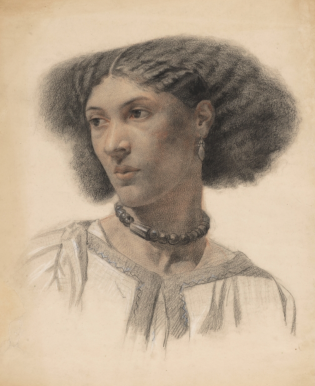 An appropriate end to this post about memory of things, and people past might be the poem Dante Gabriel Rossettis’s  sister, a recognised writer of her time, once wrote.

Remember me when I am gone away,

Gone far away into the silent land;

When you can no more hold me by the hand,

Nor I half turn to go yet turning stay.

Remember me when no more day by day

You tell me of our future that you plann’d:

Only remember me; you understand

It will be late to counsel then or pray.

Yet if you should forget me for a while

And afterwards remember, do not grieve:

For if the darkness and corruption leave

A vestige of the thoughts that once I had,

Better by far you should forget and smile

Than that you should remember and be sad.

Allow me to dedicate this poem today to all those forgotten victims of slavery.